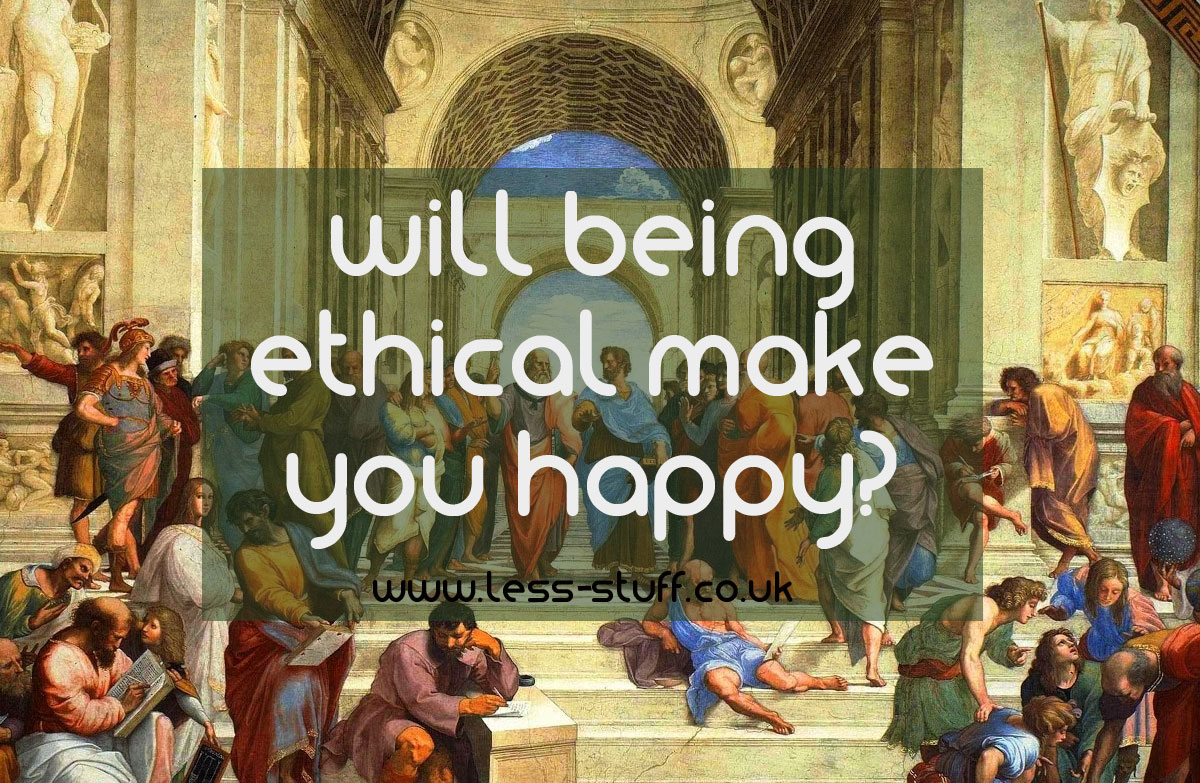 In 7 months time I’m going back to college to start a MA in design. I did my degree about 25 years ago so I’m a little worried that my brain is rusty. I’ve been dipping into some research for another book about gentle decluttering over the last year though and one google link after the next led me to Plato and Socrates. They had some very exciting ideas about objects and reality that link in very well to my fascination with how we connect with our belongings.

I thought it would be good for me to start from scratch and brilliant Coursera came to the rescue with a free course “Ancient Philosophy: Plato & His Predecessors”.  I was ticking along nicely until the final assignment, which is due today!

“Write a letter to a friend about two specific aspects of Plato’s Republic.”

I realised that knitting in front of tutorials is not the best way to remember stuff so I took my gorgeous fountain pen, a laptop, headphones and a notebook off to a nice quiet cafe and did some serious learning. Writing notes instead of typing helps you remember them better. Writing with a fountain pen means you need to take time to consider what you are doing so you get a double benefit.

So, here is my assignment, it is in the form of a blog post which is a letter to everyone.

Is Socratic ‘justice’ the same as being ‘ethical’ and will being just make you happy?

Plato was a student of Socrates back in the 5th century BCE. Socrates didn’t write anything down but Plato used his character in dialogues, where he has Socrates talking to other philosophers and notable figures of the day. Socrates was executed in 399 BCE for ‘corrupting the youth’ and despite looking like a mask of Silenus, the bloated and drunk friend of wine-god Dionysus his corruption was of the mind, not the body.¹ His crime was impiety on two counts: failing to recognise the gods and introducing new deities.

Socrates was a bit of a wind up merchant. He was determined that he was not a teacher and that our souls have been regenerated so many times that we possess knowledge about everything. Socrates would weed out the answers to problems by a series of questions that would tie people in knots.

The Republic starts off with Socrates talking to different people about their definitions of justice. Cephalus is an old man who says that justice is paying debts and telling the truth². Socrates disputes this by reminding Cepahlus that he is rich and it is easy for him to pay debts. Polemarchus thinks that justice is doing good to your friends and evil to your enemies but Socrates cannot accept that justice means being bad to anyone. Thrasymachus, a Sophist who is in it for the money, disputes that justice is a good thing and says that it is in the hands of the stronger who look after the weaker. If the weak behave justly they only benefit the strong.  If they break the law they will be better off, injustice is ‘profitable and advantageous for oneself’ (344c). Socrates argues that government is an art and all arts are concerned with perfection and therefore with themselves. True justice would not mean personal gain.

Justice in the Republic isn’t simply a method of doling out punishment for a crime. Justice in this sense includes honour, generosity, moderation and respect for others. Justice is a virtue. The Merriam Webster dictionary describes ‘ethics’ as ‘a set of moral principles : a theory or system of moral values‘. I’m new to this, and I might be wrong, but to me, Socrates was talking about ethics and labeling it justice.

Why bother being just?

If I was less ethical and I treated my clients badly, ripping them off and selling them things they didn’t need I could probably get away with it. I don’t believe in an afterlife although even if I did I could say confession and have my sins absolved. I have a good reputation for being ethical but if I started to buy Nescafe or put my recycling into landfill no one would know about it. What is the point of being virtuously just and ethical? In the Republic Socrates sought to prove that it was worth being just for it’s own sake.

We are made of many parts

Book 2 of the Republic describes political justice and defines a perfect community. Composed of Leaders, Workers and Defenders our desires and needs for food, clothing, art and entertainment are easier to get than if you were totally self sufficient. Skill sharing and work division, specialisation in topics and talents helps other people and ourselves. In book 4, these three functions, the rulers, the military and the producers are echoed (according to Socrates) in individual people or ‘the soul’. Reason (leaders), Appetite (workers) and Spirit (defenders) all mix together and balance to make up a complete person. All elements of the tripartite conflict so when we can achieve a balance within ourselves we have a properly functioning soul.

Will being just make you happy?

Socrates called these internal conflicts “the civil war [stasis] of the soul” (440e4-6) The properly functioning soul can still have desires but they will be ruled by Reason. Spirit supports reason and Appetites will be working for the body and kept in check by both Reason and Spirit. Socrates said that this balance is justice of the soul. An unjust soul would be in turmoil, always reacting to passions with each element fighting against each other. Socrates says that without a just soul it will not be possible to get any benefit out of the things that can make us happy on earth: food, sex, political power, comfortable homes etc.

What would Socrates say?

If I was one of the people Socrates met at the party at the start of Book 1 of the Republic what would my answers be? Let’s call it ethics instead of justice to make it easier for me. What are my true beliefs about ethics.

I think that an ethical life is one that causes no harm to others or the planet and helps people lead easier lives.

What is my definition of ethical?

How can I define ethical to turn my true beliefs into knowledge? This is the route that Socrates would lead me down and I find it hard to do myself. Of course I agree with the dictionary definition that ethics are a set of moral principals. For me those principals are fairness, equality, safety and sustainability. Does this definition help me turn my true belief about an ethical life into knowledge? Yes, I think it does. Defining what I believe in helps me focus and work towards living a more just life.

[443d] that justice is indeed something of this kind, yet not in regard to the doing of one’s own business externally, but with regard to that which is within and in the true sense concerns one’s self, and the things of one’s self—it means that1 a man must not suffer the principles in his soul to do each the work of some other and interfere and meddle with one another, but that he should dispose well of what in the true sense of the word is properly his own,2 and having first attained to self-mastery3 and beautiful order4 within himself,5 and having harmonized6 these three principles, the notes or intervals of three terms quite literally the lowest, the highest, and the mean,

[443e] and all others there may be between them, and having linked and bound all three together and made of himself a unit,1 one man instead of many, self-controlled and in unison, he should then and then only turn to practice if he find aught to do either in the getting of wealth or the tendance of the body or it may be in political action or private business, in all such doings believing and naming2 the just and honorable action to be that which preserves and helps to produce this condition of soul, and wisdom the science

¹The Mask of Socrates: The Image of the Intellectual in Antiquity. Paul Zanker.